Safety Devices Aren’t Any Good if Not Operational

The 2013 workplace death of an electrician working for a wheel-manufacturing company in Southern California is a textbook example of why you need to regularly maintain your safety equipment.

The electrician was crushed to death after he was caught between a moving hoist and a chrome-plating tank at the worksite. The accident occurred when as he was leaning over a tank from his position on a catwalk to check on the flow from a pump filter that had been installed in the tank.

The electrician had entered the plating area unbeknownst to the hoist operator.

Instead of shutting off like it was supposed to, the hoist pinned the worker between the tank and pipes on its rim. The hoist, which was computer-controlled, was equipped with a safety sensor that was designed to shut the hoist off immediately if it makes contact with an object.

The California Department of Public Health’s Fatality Assessment and Control Evaluation (FACE) unit investigated the incident to see what went wrong and found that the safety sensor was not operational.

The recommendations by FACE apply to any manufacturing setting:

1. Ensure that moving machinery is inoperable when employee access into a danger zone is required. Danger zones include places in or around machines or pieces of equipment where employees can suffer injuries.

In this case, the operator was supposed to stop the hoist if he observed a worker entering the danger zone – the area immediately adjacent to the tanks in the hoist’s path. FACE says the employer could have installed additional mechanisms to stop the hoist, including gate interlocks, visual or auditory warning alarms, or sensing devices.

An alternative protection would be a lockout/tagout procedure that would shut down the hoist whenever an employee is required to enter the danger zone.

2. Ensure that emergency safety devices are maintained in operating condition. As noted, the hoist was equipped with a safety sensor, but it did not work. A post-incident inspection of it revealed that the atmosphere around the tank had produced corrosion that rendered the stop inoperable.

The Division of Occupational Safety and Health cited the employer for several alleged serious violations, including a willful-serious violation of General Industry Safety Orders §4002 for the faulty sensor. Cal/OSHA is seeking more than $120,000 in penalties in the case. 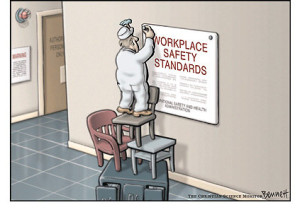