More Lawsuits Want Pay for Work Done before, after Clocking in

For years there’s been a debate in the manufacturing, farming, mining and like industries about the merits of paying employees for the time they spend putting on and removing work clothes and protective gear before and after their shifts.

Individual and class-action lawsuits have been filed by employees seeking pay for the time they spend “donning and doffing,” which can sometimes be 15 minutes or more in some industries.

But these lawsuits may no longer be the domain of those labor-intensive industries. In recent years, office and service sector employees have started suing their employers for back wages for time they spent performing what they consider job-related functions before and after their work shifts.

The whole enchilada – Two lawsuits, one filed in October, are seeking class status in accusing the national eatery chain Chipotle of requiring employees to continue working after clocking out. In the latter case, a former employee accused Chipotle of conducting training, meetings and other activities which employees were “required to attend, but for which they are not allowed to punch in.”

Additionally, the suit alleges that the company encouraged managers “to require that work be performed off the clock” after 12:30 a.m. and that systems were put in place for “reward and punishment” of supervisors who either stayed within or exceeded their payroll budgets.

The bankers – A court recently approved a $6 million settlement in a case where two employees accused their employer, TD Bank, of requiring them to arrive early to work each day in order to undertake various procedures to open the branch for business.

Amongst the requirements were various security functions that needed to be performed both inside and outside the branch before the computers could even be booted up for the day’s activities.

Warehouse screening – In January 2014, an employee sued Amazon.com Inc. for allegedly failing to compensate her and others adequately for an end-of-shift screening process that “approximately takes between 10 and 20 minutes and, with delays … can last longer.”  The plaintiff further added that Amazon does not pay its warehouse workers for time spent passing through the same screening process during meal breaks or for walking to that screening area.

In general, compensable hours worked include all time an employee is on duty or at a prescribed place of work and any time that an employee is suffered or permitted to work.

Under the Portal-to-Portal Act, which supplements and limits the FLSA, employers are not required to pay workers for incidental activities before and after work that are not integral to the employee’s principal work activities. This includes things like time traveling to and from work.

At the same time, the Portal-to-Portal Act states that employers must count as working time incidental activities that are integral to the job, such as depositing the mail after the close of business, or changing clothes and showering if required by the employer.

In light of this new legal trend, you need to be careful about how you are compensating your staff for all the time they spend on activities that are integral and indispensable to their principal work duties.

So, if you are requiring your workers to perform duties before or after clocking in, you may be running afoul of the law. If you do, you should revisit your policy and talk to a labor attorney. It would be wise to put in place policies and procedures for tracking the time employers spend on those activities to make sure they are properly paid. 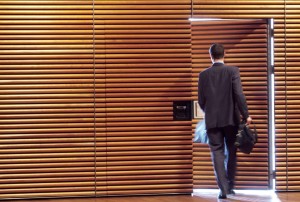