Drug Inflation May Push Many Plans into Cadillac Tax Territory

A new report by the consulting firm Milliman predicts that a typical family of four covered by an employer-sponsored preferred provider organization (PPO) health plan will incur health care costs in excess of $25,000 by 2016, which is just a few thousand dollars shy of the Cadillac tax threshold of $27,500 for a family of that size.

While 2014 marked one of the lowest rates of health care cost inflation on record at 5.4%, Milliman notes that costs have increased 6.3% this year.

The company calculates these figures according to the Milliman Medical Index (MMI), which is its analysis of the projected total cost of health care for a hypothetical family of four with an employer PPO. It includes all health care benefits in its calculations, including employers’ costs and premiums.

Milliman predicts that the excise tax threshold is more likely to be reached if a plan is provided by a smaller employer, and if inflation trends exceed recent levels. Employer size affects the portion of premium attributable to loads for administrative expenses and health plan profits, and larger employers tend to command lower expense and profit loads, the consulting firm explains.

And worse, once the threshold is breached, it will be difficult to avoid the tax in subsequent years since health care expense trends will likely exceed the Consumer Price Index, which will be used to adjust the threshold in the years after 2018.

Milliman predicts that most family plans will at some point be taxed. Using its MMI to predict when plans will be large enough to be taxed, when that happens will depend on the rate of health care cost inflation and whether an employee works for a large, mid-sized or small employer.

Furthermore, the threshold is adjusted to reflect national cost trends, whereas a given employer’s costs may change at a much higher or lower rate due to local conditions or other effects.

The rise in costs so far is largely due, says Milliman, to increases in prescription drug costs. From 2014 to 2015, pharmaceutical costs spiked, growing by 13.6%, whereas growth over the previous five years averaged only 6.8% – or on par with health care inflation in general.

Milliman attributes the 2014/2015 numbers largely to the following:

It is predicting an even steeper rate for next year in light of the fact that the cost of pharmaceuticals continues climbing at unprecedented levels. 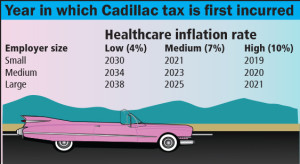