Even though covered employees are paying more on average for their health insurance and out-of-pocket medical costs, fewer of them are contributing to their health savings accounts – and those that do, contribute less than in the past, a new study says.

The study found that employers are also contributing less to their employees’ HSAs.

The trend among HSA holders goes against the grain, since these individuals could benefit from paying for their medical and insurance costs with pre-tax dollars that they can set aside from each paycheck.

HSAs are typically tied to consumer-driven health plans, which generally have higher deductibles than typical insurance policies. They are paired together to ensure that the covered employee sets aside money for health and medical expenditures over the year, as they’ll have to foot a good chunk of those expenses until the deductible is covered.

While the study does not indicate why this is happening, it could be due to the fact that many people have built up account balances over time, according to the EBRI.

Unlike flexible spending account balances, in which money is generally lost if unused at year-end, HSA balances accumulate and can be used in future years even if workers change jobs.

Health savings accounts were established in 2003 as a way for people to save for future out-of-pocket medical expenses. The money is deposited, accumulates and can be withdrawn tax-free. The accounts must be linked to a health plan with a deductible of at least $1,300 for individual coverage and $2,600 for family coverage in 2015.

Another notable development was that fewer employees said they received employer contributions to their HSAs to 67% in 2014, compared to 71% the year prior.

Also notable is the fact that participation and employee contribution levels are waning, even though more companies are offering plans linked to HSAs.

In 2014, 73% of companies with more than 1,000 workers offered HSAs, up from just 51% in 2009, according to another study, the Towers Watson/National Business Group on Health annual employer health care survey.

The Triple Tax Benefits of HSAs

HSAs offer a triple tax advantage to account holders, according to the Employee Benefits Research Institute:

Also, they can roll over any unused funds to the next year, so they don’t have to worry about losing any money they set aside. 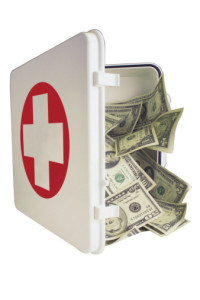